Read the original article with video at Touch Arcade

Based on the new movie Turbo from DreamWorks Animation, Turbo Racing League [Free] is, as it says on the label, a racing game, developed by the good folks at PikPok, who are known for developing very fun pick up and play games like Into the Dead and Super Monsters Ate My Condo. While Turbo Racing League isn't quite at the same level as those two, it's nevertheless a very fun, competent racer.

For those not familiar with the film, Turbo follows the story of a snail who dreams of becoming the fastest racer in the world. In the game, you control a snail racer, working your way up the ladder to reach the highest racing class. Suffice it to say, this is not a simulation racer. Instead, it takes a page from drift-heavy racers like the classic Outrun, along with track design littered with boost pads in the vein of F-Zero and other futuristic racers. There are one or two shortcuts set on each track that you'll want to hit as often as you can, but the meat of the game is drifting skillfully around the tracks, going from boost pad to boost pad. 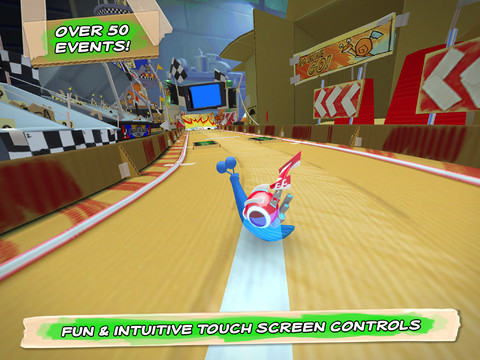 The tracks all reflect the small size of your would-be speedster, built on tabletops with everyday objects like books and playing cards creating tunnels and ramps. The selection of tracks, nine in total at the moment, offers up a nice variety of hairpin turns, hills, loop-de-loops, and jumps. They're very fun, both to look at and play. You'll be completing a few different types of challenges on these tracks, including one-on-one races, time trials, slaloms, and fuel challenges. Fuel challenges are interesting because you need to pick up fuel around the track in order to keep going, but a taken can of fuel will not reappear on your next lap, so you need to plan carefully.

Progression in Turbo Racing League is a hybrid of typical racing games and three-star challenges. To move up to the next racing class, you need to earn a set amount of stars. Each challenge offers up to three stars, and you can have three of these challenges open at any given time. Once you three-star it, the challenge clears and another one appears. This gives you some options, in case a particular challenge is giving you grief, but only to certain point. You'll never make it to the next racing class if you can't three-star at least one of the challenges in front of you. You also have the option to run a time trial on any of that class's tracks, to practice, or to earn some tomatoes to upgrade your racer. 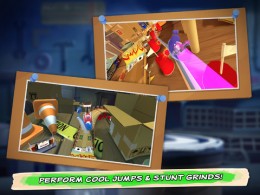 Initially, your snail is very plain, better suited to a dinner plate in an upscale restaurant than the Indy 500. As you complete races and challenges, you'll pick up tomatoes, some on the track, but most as prizes for performing well. You can use these tomatoes to trick out your snail in a huge variety of ways, from boosting your base stats to purchasing new shells and shell accessories. You can even purchase new snails, though that requires quite a few tomatoes. Unfortunately, as you move up to each new racing class, you'll need to buy your upgrades all over again, which is a bit disappointing.

The game is very free with the tomatoes in the early going, but from Class 2 on, things start to get a bit more expensive, so you might have to grind a bit if you want to really improve your stats. Naturally, if you don't feel like grinding, a bevy of tomatoes are just an IAP away, including the ever-useful doubler. Additionally, you can complete daily challenges to earn a few more tomatoes, though not terribly many. The game ups its challenge at a pretty fair rate, so even if you don't want to spend money on IAPs, you should be able to move forward without getting stalled for too long at any given point, given enough practice and skill.

You can choose from four different control layouts. The game defaults to tilt controls but will immediately give you the choice to change them to one of the other three layouts. If you like virtual controls, you have two flavors to choose from, or if you don't, you can pick a control option that relies on simple left-side/right-side touches. I found the tilt controls to be more than capable in most cases, but the slalom races were a little tricky initially. The options are certainly quite welcome, so good on PikPok for including them.

Overall, Turbo Racing League is a very fun game. Although it's probably not the kind of game you'll sit down with for hours at a time, there's a surprising amount of depth to the racing itself, as people on our forums have discovered. If you're looking for a quick bit of arcade racing fun with a nice dollop of visual charm on top, you should check this one out.